Two euro each or two for a fiver

BREAKING NEWS! Quite literally some breaking news. I broke my humerus bone. The wall came out of nowhere and long story short there’s 2 metal plates and 14 screws. All obviously well rust treated, but as the old master would say “To work on car, you must become car”. I might have taken it too literally.

We said adios to the Renault and the white MG B Roadster at the weekend. Awful sad lads, awful sad. What’s worse is that we’ll be saying goodbye to the 1981 Mini (in blue) soon enough as well. They grow up so fast. BUT! That means more projects and an excuse to order in more parts. One word – bubble wrap. Yes, two words, but I’ve one hand so give me a break like.

With the career threatening injury (I’m not one for exaggerating…) the floodgates opened and many an episode of Overhaulin’ and Fast N Loud was watched. As a great man once said – “Great to see”. So, after being in no way influenced… We have a loverly Mini Shell and a loverly MG B Roadster shell that I’ve sketched up a few ideas for. The Mini will probably come first but there’s subtle modifications being made like countersunk petrol caps, custom rear lights….Look I’ve said too much. But you can have a look at one of the sketches below, luckily it was my bad hand that got injured so it didn’t affect my drawing skills. 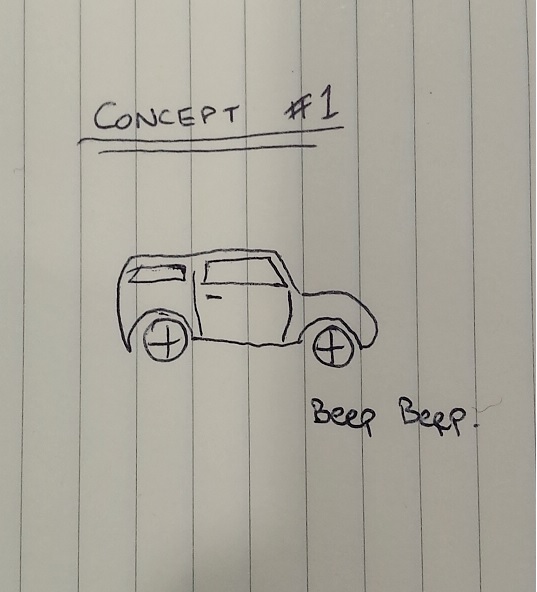 We took a trip to Laois at the weekend, and just for something different we went to a car show. Lads. An indoor car show in Ireland – Genius. Seriously though, there needs to be more of these as all the big expensive cars come out to play. There was a McLaren. ‘Nuff said.

Actually, did you see the cinematic reveal for the 81 Mini? If not why not? It took months! You can have a shnakey look at it here on the YouTubes.

I think I just spotted one of the lads trying to head for an early lunch. Is he joking! This isn’t a holiday resort at all. The only time they’re allowed near the swimming pool is when they have to clean it for me. Lads listen I’ll have to sort this divil out, go on and mind yourselves, there’s walls out there that jump out of nowhere.

On a more serious note, if you’re interested in a Mini or MG that’s a little bit different get in touch, we’re on the phone or on the line anytime. (That was tough, I’m not suited to this being serious craic!)

Great talk. David over and out.