Not to boast too much, but we're famous

Don't get too excited ok, but I think I'm famous. Just waiting for the sponsorship deals to roll in now... I'd look good kitted out in some nice new gear. You know, a nice modest brand that charges five thousand euro for a t-shirt. They'll surely come knocking... surely.

While I wait, here's a snippet of our Irish Examiner piece.

1 - What are the most unusual and rare types of cars you have restored?
In Ireland it's pretty rare to find, eh... rare cars! I could tell you about cars that have come in with no more than a wiper blade and a door handle, or a car that has matching engine and chassis numbers with a meticulous file packed with receipts and service records. But they're not the most interesting. What makes a car truly unusual and unique is the story behind it. The reason you bought it, the reason you want to restore it and drive it. We call that the "why".
We've recently had a few cars here that give you that warm fuzzy feeling. The last MG B Roadster we restored belonged to a guy who saw one as a schoolboy, and decided that when he got older that that was going to be his car. No stone or screw was left unturned to make sure this car was perfect. It probably ended up being better than meeting his hero.
A rare car would be the Irish built Morris Mini Traveller, which was spotted by a guy when he was young, and he kept tabs on it throughout its life and when the opportunity came to buy it he jumped at the chance.
The metallic red Austin Maxi is unusual, in that it wouldn't be everyone's first choice of car to restore, values are low and parts are incredibly scarce. But it was bought by a father for his daughter and he to work on. Sadly due to ill health he was unable to restore the car. But now the car is finished, and there probably isn't another car with the same value. It's beyond priceless.
These are the types of cars that get you into the garage early to work on, that bring you that extra mile. We're talking about someone who still has their first ever car. Absolutely no market value, but what it does have is that MasterCard value - priceless.
2 - Have you restored cars belonging to famous people - who were they and what cars did they own?
Honestly I'd love to tell you, but we've got a strict "don't kiss and tell" rule here. So all I can say is yes... 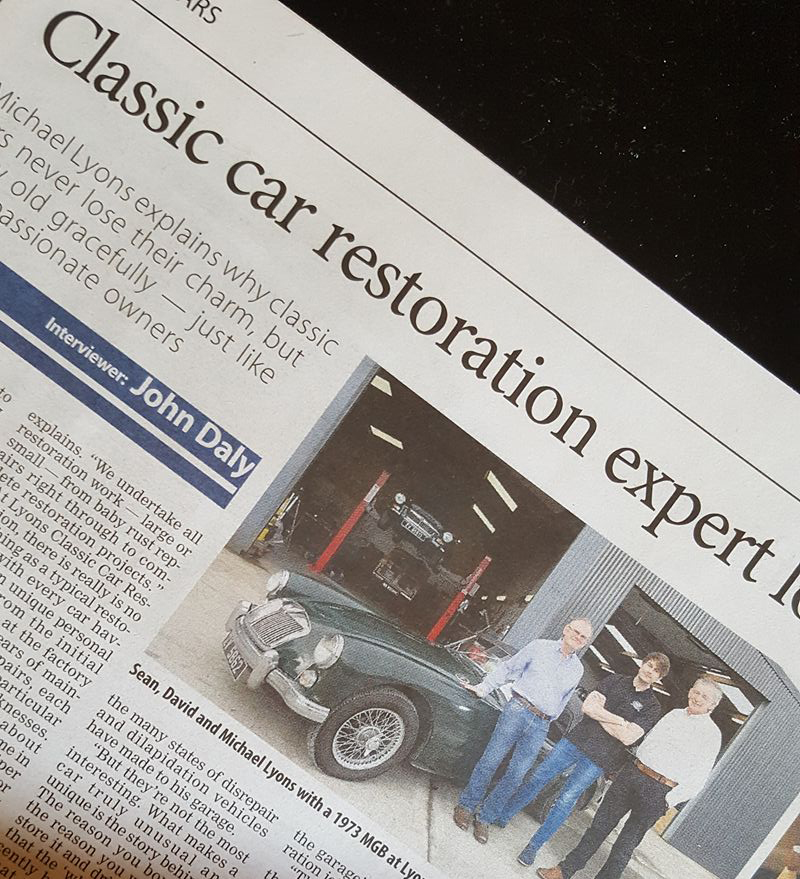 3 - Is it only wealthy people who own classic cars, or can the man in the street afford them?
No, not at all. Any man, woman, or child in the street (or field if you're from the country - we don't discriminate here) can own a classic car. It's probably like having a pet, you've got bunny rabbits which are cheap to own and look after and it goes right through to having a pedigree puppy. It's all relative.
A classic car is an investment that you can enjoy, admire, and make other people envious of you with your full head of hair (or Homer Simpson strands) blowing in the wind as you zip around the bends in your 60's convertible.
The term classic car covers a hell of a lot of cars. From affordable Minis right through to auction house headliners like Aston's and Ferraris. There are cars that people buy for nostalgia, cars that people want to show off, and cars that people just want to be able to tinker away with as a hobby. So classic car ownership really is for everyone.
Our advice would be to get out there, (everybody knows somebody that knows somebody that has an old car locked away gathering dust and rust) find a car you like, do a little bit of research on parts availability, values... And then give us a call. We'll turn it into a car that you'll always look back at after you park it.
4 - What was the most challenging and difficult restoration work you have ever done?
There was probably one week where the guys in the workshop would keep doing this thing where they would take an hour off in the middle of the day to eat, really killed the productivity.
At this stage most cars are the same. All have suffered from the changeable Irish weather of wet to very wet causing endless rot and a panels list that is just as endless. So when you get to the stage of having a car stripped out, rust cut out and you have what is effectively a metal version of Swiss cheese staring back at you, you can't really see how it could get much worse.
But it does! The hardest, and probably worst restoration is when somebody else has started work on the car and the chassis and structural integrity of the car has been compromised. A lot of cutting and chopping has happened before the person has realised they've attempted something beyond their skill set. Those are the nightmare situations and the one's we really don't like to see.
5 - If you had unlimited money, what is the classic car you’d buy for yourself, and why?
I hope you have an hour spare while I take out my wish list?
Obviously there's a soft spot for MG A Roadsters, but that's a nostalgia thing. Who wouldn't want to be pulling up in an Aston Martin DB5 à la James Bond, or even a Ferrari 250 GT California. It's one of the most expensive car in the world for a reason. There's Bugatti Type 57s, DeTomasos and the Delahaye boat tails, but I don't know if anything beats a Jaguar E Type series 1.